As of 2018, Winship Herr is University of Lausanne Professor Emeritus at the CIG. He received his PhD from Harvard University in 1982 for studies on recombinant retroviruses in leukemogenic mice with Walter Gilbert. After postdoctoral studies with Frederick Sanger in Cambridge England and Joe Sambrook at Cold Spring Harbor Laboratory, he joined the Cold Spring Harbor Laboratory faculty in 1984. In 1998, he spearheaded the Laboratory’s transformation into a Ph.D. degree-granting institution with the establishment of the Watson School of Biological Sciences — he was its founding dean from 1998–2004. He arrived at the Center for Integrative Genomics in 2004. For the University of Lausanne Faculty of Biology and Medicine, he was vice-dean for biology (2007–2009) and director of the School of Biology (2009–2015). In 2008, he was elected member of the European Molecular Biology Organization (EMBO) and in 2009 received the degree of Doctor of Science, honoris causa, Watson School of Biological Sciences, Cold Spring Harbor Laboratory.

During his research career, Dr. Herr’s interests focused on how gene expression in human cells regulates cell growth, proliferation, and differentiation. To understand this regulation, he used viruses as probes to elucidate mechanisms of combinatorial action of viral and cellular regulatory proteins. His studies elucidated fundamental mechanisms by which human-gene expression is controlled. 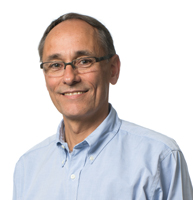