Walter Wahli received his PhD from the University of Bern. He was a postdoc at the Carnegie Institution of Washington in Baltimore, and a visiting associate at the National Cancer Institute, NIH, Bethesda. He became Professor and Director of the Institute of Animal Biology of the UNIL in 1980 and was Vice-rector. He founded the CIG, which he directed until 2005. He has been a member of the SNSF’s research council and presided over the Biology and Medicine Division. He became a member of the Swiss Science and Technology Council in 2008. He is an elected member of the EMBO and of the Institut Jurassien des Sciences, des Lettres et des Arts. Since 2007, he is an elected individual member of the Swiss National Academy of Medical Sciences. He received the Otto-Naegeli Prize (2002), the European Federation of Lipid Research Award (2002) and the Hartmann Müller Prize (2008). He is currently a Professor of Metabolic Disease in Lee Kong Chian School of Medicine, Nanyang Technological University & Imperial College London. 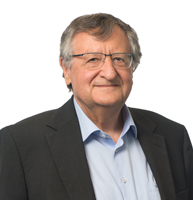