The main purpose of the Swiss Elite Observatory (Obelis) is to document and study the men and women in positions of power in the Swiss political, economic, administrative and academic spheres in the 20th and 21st centuries, and to better understand the power relations that structure the Swiss society. In addition, Obelis develops research projects on transnational elites, particularly in the economic sphere.

We regularly publish scientific articles and books and also actively participate in public debate on the issue of elites and power.

Obelis hosts several research projects funded by the Swiss National Science Foundation. These projects are linked to each other and are based on the same cumulative database, the Swiss Elite Database, which contains more than 30,000 entries on political, economic, administrative and academic elites since the beginning of the 20th century. We use different qualitative and quantitative methodological approaches.

Obelis is attached to the Institute of Political Studies of the University of Lausanne and characterized by an interdisciplinary approach, bringing together researchers in political science, history, sociology and management from various Swiss and foreign universities. Obelis members give several lessons on the sociology and history of the elites and regularly organize conferences on these issues. 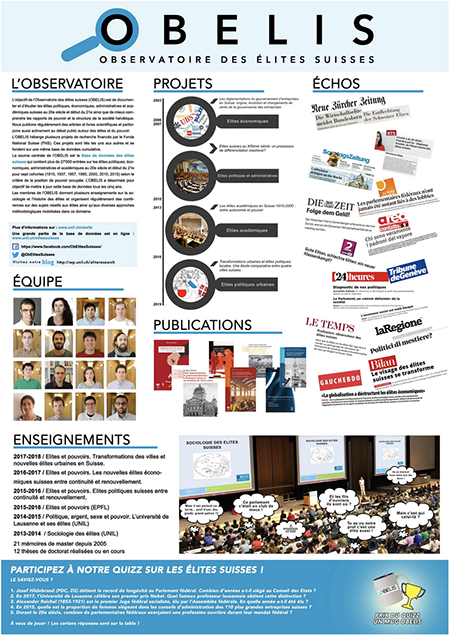