UNIL | University of Lausanne
You are here: UNIL > About UNIL > Yesterday and today > The UNIL in the 19th century

The UNIL in the 19th century

Vacation courses for non-francophone students wishing to learn French were introduced under the aegis of the Faculty of Arts.

The School of Physics and Chemistry was inaugurated at the Place du Château.

On the 10th May a law on higher public education was enacted which conferred the name and status of University on the former Academy. The Faculty of Medicine was founded. Alexander Maurer, professor of Comparative Literature and Rector of the former Academy, was appointed Rector of the new University of Lausanne. A total of 300 students were enrolled.

Creation of the School of Pharmacy.

On the 12th May a law on higher education was passed. The Academy thereby acquired the legal status necessary for its transformation into a University a few years later. Four faculties now enjoyed equal status: Arts, Science, Law and Theology. The Special School became part of the Academy, with the title of Technical Faculty. As well as awarding first degrees, these five faculties of the Academy could now confer doctorate degrees. The high school or Gymnasium was divided into 2 sections (Arts and Science).

Foundation of the Special School of Lausanne (later to become the Engineering School). The new school was founded on the personal initiative of 5 senior technicians, all engineers from Vaud, but educated in Paris, and professors of Mathematics and Chemistry at the Academy. It was modelled on the Central School in Paris.

As the result of a law passed on the 21st December, the character of the Academy was radically changed. Its new role was to provide the necessary higher training and qualifications for men wishing to pursue a professional career and to safeguard and maintain the literary and scientific culture of the state. For the first time since its foundation, the Academy was no longer a strictly theological school. It was now a secular institution and therefore lost its ecclesiastical character, along with the privileges which it had held for almost 3 centuries. The teaching language was now French and there were 3 faculties: Arts and Science, Law, and Theology. Each faculty could award degrees, and there were now 17 chairs:

A Gymnase was created as a transition between secondary school and higher education. Academic freedom as to the choice and content of courses was officially recognized.

Founding of the College of Education to train male and, starting from 1837, female teachers.

On the 28th May a law was enacted regulating the education system in the State of Vaud. An Academic Council was responsible for the three levels of schooling at primary, secondary, and tertiary levels. Charles Monnard, together with a small group of students, founded The Literary Society whose aim was to encourage literary studies. 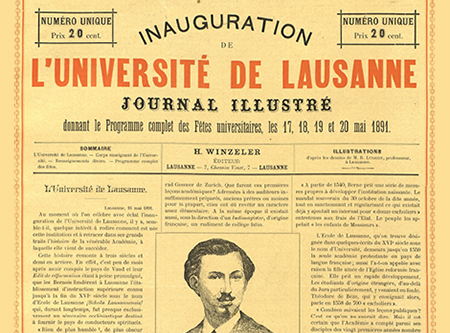